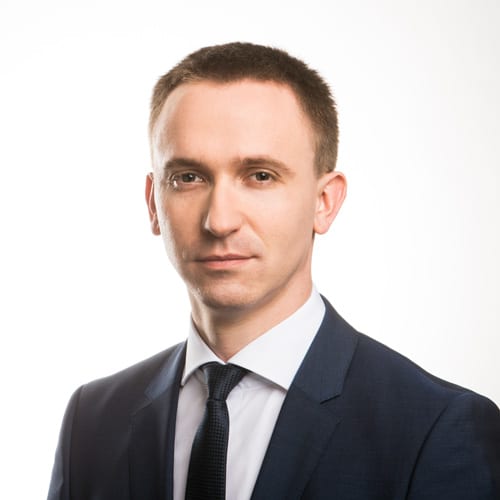 He specializes in litigation and arbitration in the field of civil, economic and banking law.

He has many years of experience in advising and representing financial institutions, business entities operating in the construction, telecommunications and defense industries, as well as retail networks before courts. He's also experienced in advising banks on the implementation of large credit projects for financing business real estate, as well as on issues related to bankruptcy law.

He graduated from the Faculty of Law and Administration of the Jagiellonian University. Since 2015, he has been a attorney-at-law registered on the list of the District Bar in Krakow.

In particular, has advised:
Metro Group
during the de-investment of the real,- hypermarkets in Poland to Auchan Group.
Bank Pekao S.A.
with respect to a construction credit facility and an investment credit facility for financing and refinancing of the Quattro Business Park project, four Class A buildings, carried out by the Buma Group in Kraków.
Bank Handlowy w Warszawie S.A.
with respect to asserting claims by the bank and enforcing securities of the claims as well as with respect to FX options.
Hugo Boss AG
in the acquisition of a retail network in Poland from the franchisee.
Wojskowe Zakłady Mechaniczne S.A.
in the dispute with the supplier of components for the construction of the Rosomak wheeled armored transporter.
Add contact